Hey guys, its your girl KrisSimsters and before you say it, when it came to K-Pop I have been lazy this year. I mean, I’ve been lazy with my other writing too, but I have been extremely lazy with K-Pop this year. And it’s not like I haven’t been watching it, I’m caught up with K-Pop so far this year, but I haven’t had a real chance to write it and while I can easily blame it on work…I mean I can really easily blame it on work, I’m going to say it’s more of me not having the mood to write K-Pop. That being said, I’m trying to play catch up on everything with this blog, so I’m going to give you a Top Tens list of my favorite K-Pop songs of 2017…so far. Lets talk about some K-Pop shall we?

If I’m going to be making a list based on my favorites, then I’m going to start with Pristin, a new girl group that debuted back in late March and I honestly love their debut song. As somebody who doesn’t really like the “I like you but you don’t like me” type of song (even though it’s the only thing most girl groups sing about nowadays), I really liked Wee Woo. Mostly because its catchy, but also because it has Zhou Jieqiong aka Kyulkyung aka Pinky from I.O.I and I loved her. She was my second favorite to win a spot on Produce 101 (the first being Jeon Soyeon) and I’m glad she won. She is amazing and fits in this group perfectly. Another thing I loved about Wee Woo is how odd the M/V is.  I don’t know which direction it’s going in and I love it. I also love the dance, especially this bit…

There are times I get easily ecstatic about some K-Pop dances and this bit is almost as good as G-Friend’s amazing leg movements. I hope they get to perform at MAMA this year just for the super superhero move. 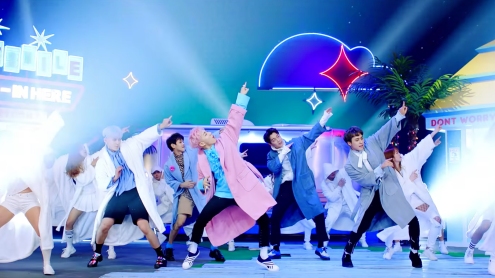 Highlight (formerly known as BEAST) decided to leave CUBE in 2016 just like–I mean the other members of 4MINUTE did after their single bombed because of CUBE’s stupidity of song choice, but that’s another topic for another day. Anyway, BEAST left their one member behind too–even though Jang Hyunseung was probably the worst member in BEAST–and decided to form their own company and change their name to Highlight and damn do they sound better as Highlight.

I’m not kidding, Plz Don’t be Sad is a great song and it makes me glad that they are finally making their own music, making their own schedules and actually know what they’re doing. The M/V starts out as a sad song and I thought it was going to be a sad song, but it’s so upbeat and just so colorful. This is so energetic and again I love it. Good job, Highlight.

Wow, RV really regressed with this song didn’t they? Honestly, this is Red Velvet’s worst song to date if you compare it with the rest of their discography, especially if you compare it to Happiness, so yeah its their worst song to date. Despite this, the song’s saving grace is definitely how colorful and out there the M/V is, and the fact that it’s actually better sung live than in studio. And this was the only Red Velvet to get a dance practice video, even though that honor should have gone to Dumb Dumb because Dumb Dumb was just pure awesome.

There is a saving grace to this song that it barely made my list and it’s Wendy. I loved Wendy’s look in this M/V, they sort of brought back the blue/black hair from RV’s Happiness days and I loved it. Also, the vocal line saves this song, but it’s still going to be #8 on my list.

I never thought I’d see the day that CLC decided to release something not bad. And if I’m being frank, it’s only because 4MINUTE left that we’re finally seeing CLC shine. I don’t exactly love this song, but I like it enough that it deserves a spot on this list. The color aspect is nice, the dance is good and as the same with the other people on my list so far, the song is good and catchy. Lets be honest, it isn’t as amazing now as it was back when it was first released, but it proved that January wasn’t a complete waste when it came to K-Pop.

The thing I actually liked the most about this group is the outfit choice, it is amazing. It’s badass, but has a nice girly feel to it. And since they were 4MINUTE’s former sister group, maybe they should have had this concept to begin with. If they had worked with this concept and taken notes from 4MINUTE, then they would have improved on their concept for now. Nevertheless, this song is still awesome enough to make my list.

OK, if there was ever a time we need some sort of K-Pop revolution song, then it would be now with B.A.P’s Wake Me Up. Lets forget that this is basically a newer version of their older song, Badman mixed in with some I Need U from BTS when it comes to the actual story.  That being said, this isn’t a bad song. As I stated a few seconds ago, this is the kind of song that Korea needs right now. The song is really good, it’s not as good as Skydive, but it’s still a good song. I’m glad B.A.P is finally releasing good music again. It took T.S. long enough. Now if only he can release a good song for SONAMOO, we’d be in business.

Damn I love this song. While the M/V might not be one of instant favorites, I love the song itself to bits. I love how funky it is, it reminds me of a classic MAMAMOO–and not just because Solar’s in it–but because it’s really good. I really like the combination of Luna, Solar, and Hani; three powerhouse vocals but they don’t interfere with each other. The M/V itself is kinda basic, but there is one part I loved about it…

No shocker here, but I love how sexy Luna is, especially if she’s only wearing overalls with a white flurry bra. Or is that a bustier? Either way, it’s sexy and I like sexy.

Despite how I feel about the four-(then three)-member girl group, I can’t be bitchy here, I like this song and this M/V. Yeah I still have issues with the drama surrounding this former powerhouse group and the label–once again, YG can kiss my ass–but that doesn’t mean his label can’t produce great music when they really get into it. As mentioned before, this was a goodbye song and it was a good one. I liked the black and white M/V, the instrumental, and the actual lyrics. I’m glad 2NE1 went out with a bang because with Bom’s career headed nowhere, Dara going into acting, and CL doing whatever the hell CL wants to do…I doubt we get any music from these three before the end of 2017. Also, this is a gift for Blackjacks because by the time this review goes up, 2NE1’s supposed eighth anniversary will have come and gone and I’m sure they’ll need some love.

This is my favorite Minzy song from the album and I honestly wish it would have been her title track instead of the one we got. In fact, any other one of Minzy’s songs would have been a better title track than the one we got, but for now, we’re focusing on Superwoman. This is only a special performance on 1theK’s main channel so we knew it was going to be simplistic, but damn that city skyline is gorgeous. Seoul looks gorgeous at night, I think I’m more in love now than I was ever before.

I still think this dance is weak, it’s weaker than Ninano, but I’m not going to fault her a lot because this is still the first time she’s ever done a solo so she’s not used to singing and dancing on her own, but it takes time getting used too, but the other half of me is nagging because she had a year to get ready and she can do way better than she’s doing now. All that being said, the meaning of the song is the main reason why I love it. It’s empowering and beautiful, and Minzy wrote it on her own, which is a bonus point for me. But honestly MusicWorks, when Minzy comes back–which will hopefully be before the year is over–give her a better title track.

Damn it this one was hard. It was really hard…really hard. I had to choose between G-Friend and WINNER and as much as I loved Fingertip, Fool really edged it out for me. This song is beautiful and I enjoyed it much more than Really, Really. And it’s not like I hate Really Really because I don’t, it’s just in my sole opinion, they do songs like Fool and Baby Baby so much better.

The instrumental is what makes this song sound amazing. WINNER could always make a bland sound, sound rather amazing. And while I do miss Nam Taehyun (btw: Happy belated birthday), I think WINNER can do amazing things in their career as four. Also, if they lose either Minho or Kang Seungyoon then YG is absolutely screwed. 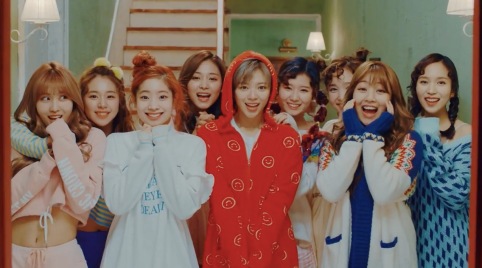 OK, I am no longer shook. Seriously though, out of all the songs TWICE released so far, I like this one the most. It’s catchy, the M/V is colorful, and I’m starting to slowly have a crush on Jeongyeon. She’s like the Amber of TWICE, but she can be more girly than Amber if that makes sense (at the time of writing this, I developed a slight headache, but I’m sure its gone now). Anyway, this song is extremely catchy and has the M/V to back it up.

And yeah, it’s a sequel to TT, but it could have honestly been good enough to be its own song as well. The dance is probably the best thing about the song, even though I’m not a huge fan of the dance practice because they could have used the same colorful backdrop they used in the M/V, but I still love it. I can honestly imagine this song winning some awards at MAMA and yeah, I know it’s too early to talk about MAMA, but when aren’t K-Pop fans talking about MAMA? Long story short, I loved this song and it managed to beat BTS. Seriously, that chorus will get stuck in your head for months so be prepared.

K-Pop has been killing it so far this year. I guess the only bad thing I have against it is SM Station Vol. 2, I haven’t gotten a decent song yet, which makes the reason for having a second volume stupid. The first volume wasn’t that amazing (it was good not amazing) but it had more memorable songs than the current one. Since I’m basically caught up now, I’ll have to start making K-Pop reviews again. I don’t mind it, especially since by the time I publish this, TWICE’s comeback is right around the corner. Unfortunately, I’ll have to go through a hurdle first and that hurdle is PSY. So until next time, my name is KrisSimsters and Stay Golden.